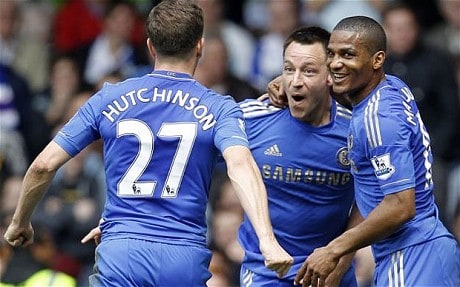 Read a full match report of the Premier League game between Chelsea and Blackburn Rovers at Stamford Bridge on Sunday May 13, 2012.

On a momentous day elsewhere in the Premier League, Chelsea’s perfunctory victory over Blackburn Rovers was nothing more than a stroll in the park, with their own day of reckoning to come in Munich next week.

With Bruce Buck, the club’s chairman and Roman Abramovich’s mouthpiece making it clear in his programme notes that finishing sixth was not ‘satisfactory’ and promising that changes will be made in the summer, Roberto Di Matteo knows his only chance of the full-time role of manager will be to add the Champions League trophy to the FA Cup.

Beating Bayern Munich on their own turf will be Chelsea’s only route back into a competition in which they have been ever-present since Abramovich took over nine years ago, and would put fourth-placed Tottenham out.

So it was no surprise that Di Matteo made wholesale changes against a relegated Blackburn side, although his gamble on putting Florent Malouda in his starting line-up may have backfired when the French winger limped off with a hamstring strain before half-time.